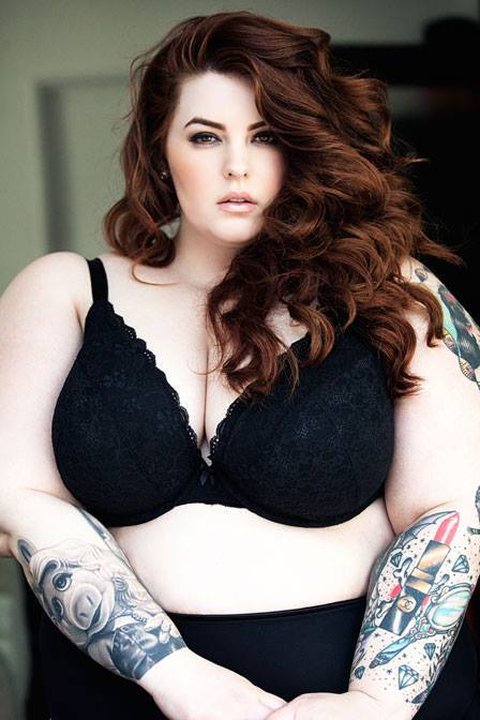 Well, apparently Plus-Sized model, Tess Holliday decided to take a swipe at Victoria’s Secret models. (sigh) And this isn’t the 1st time she has done this.
This tale is as old as time.
Now, if the tables were turned, everyone would pile up on those angels from VS and pull out the popular term, “bully”.
The fact that she then equated herself with the gay community and black community is also very telling. She sees herself as some sort of oppressed minority and therefore she believes she has Carte Blanche to say whatever she wishes without consequences? Was that her thinking?
Actually, I have no idea what she was thinking or her true rationale so I will leave that alone.
However, I will say a few other things.
Why are women constantly in a competition with one another to say, “No, I’M the ideal woman!” ?
It annoys me.
These are the times when I feel more like a man and think, geez, women are exhausting.  Am I right?
Tess is using VS to gain publicity for herself because she is preying on the insecurity of all women. Women that look at VS models and think, crap, I’m never going to look like that. I’m 5’4″ and my legs are just never going to be that long; That ship has sailed.
But Tess, you’re in for a rude awakening. I do not want to look like you. I don’t aspire to look like you and in fact you’re so heavy that you make me uncomfortable.
In addition, I have never personally been a fan of tattoos. Not in the slightest. I realize in the younger generation I may be in the minority but I’m not a fan of that look.
I dated a muscle-head guy years ago and didn’t realize he had tattoos until he wore a short-sleeved shirt. I was immediately turned off. My only exception to this would be The Rock. For him, I would make an exception.
Tess and her career rise is a stark example of political correctness gone awry.
I do not believe anyone should be picked on for the way they look.
At the same time, I do not believe she should be put on a pedestal for women either.
I’m an educated adult and you cannot convince me that Tess is healthy. She is a walking advertisement for diabetes and heart disease.
And I’ll tell you something else. As an actress, this whole discussion is also quite personal. The smallest I have ever been is a size 4 and that was a full-time job. It’s possible I was smaller at a certain point, but I’ll never know, because it always seemed when I had the bod, I didn’t have the $ for the new wardrobe and vice versa.
I am curvy. Hippy and busty. I cannot change that unless I have surgery and I’m a bit gun-shy when it comes to unnecessary surgical procedures. I have longed for breast reduction since I was a teenager.
At the same time, surgery scares the crap out of me. Although I do realize my chest makes me appear much larger on-camera. It’s a stark reality and I have accepted it.
Hollywood is also a mirror image of this political correct argument. Hollywood tells actresses that you’re either a size 0 or you’re obese. They don’t seem to allow much variance there.
There are exceptions I have seen if you’re a minority.
However, if you’re a Caucasian (appearance) actress and you’re remotely attractive, you had better be perfect. That is my opinion and my experience. Take it or leave it.
There’s all this talk about gender inequality and racial inequality in casting.
Well, I would like to put my vote in the box for a discussion about size inequality.
I have read for major leading roles on a couple series. When the casting breakdown initially came out it was, “we’re looking for an actress who needs to lose about 15 pounds”
By the time they were cast, the roles were obese. Now, one of these roles was cast with a “name” actress, so I get it.
And please let me say that I appreciate ALL auditions. I love a chance to go in and show what I do. I take my own advice and tell myself, hey, go in and Make Fans (From, “ACTING…It’s Not For Sissies”), because I’m in it for the long haul.
I am the 1st to admit that there are 100’s of reasons why you do or do not book a job. And in a lot of cases it had absolutely nothing to do with your audition.
Your resume, your name recognition, your “type”…many reasons. And they usually have “offers out” on most of these by the time I walk in their door so while I am always hopeful, I am also realistic.
However, when it came to this discussion, I felt the need to put in my 2 cents in regards to body image.
There is no such thing as perfection. And women and girls should not be lectured to by anyone as to who is their perfect body image role model.
There is a place for Tess and there is a place for the Victoria’s Secret models. And there is a place for me too!
Isn’t that the point?
I wish that Tess would focus on herself. I wish she would work on her own image and I’m not just referring to her outward appearance. She needs a PR coach, because I believe she may have overstayed her welcome.
Break A Leg!